There’s been a lot of information from us at the Museum and Archives lately about Anne Frank and the travelling exhibit from the Anne Frank House in Amsterdam. I say this not as promotion, rather to provide context for this blog because without that exhibit, it’s hard to say whether Donald Reid, Luva Perry, Harold Rogers or Erich Possin would be at the forefront of my work lately.

In conjunction with the Anne Frank exhibit, many students have joined me in the archives to learn about archival records from our collection that reflect the Canadian experience both overseas and at home during World War Two. There’s no greater opportunity to pore over an archival collection than trying to piece together a thoughtful program for students, and for a municipal archives, our local war records are substantial and impressive to say the least. Over the years, families have donated incredible collections from loved ones who served in the war, and veterans have kindly gathered their papers and records for us, recognizing that the only way to remember their stories is to first share them.

I’m putting those very records in the hands of young people in our area. Each record I’ve included in the archival class tells a story, and I’ll highlight three here.  With Remembrance Day around the corner, these records seem even more important to bring to light, lest we forget.

Donald Reid, a resident of Napanee, enlisted in 1940 when he was 21 years old. He eventually trained as a pilot in Belleville and Oshawa, and received his wings on September 24, 1942. He started writing a journal the day he boarded a boat to England – October 27, 1942 – noting on that day, “it’s of course the first large boat I’ve been on and to-day the largest in the world. Looking throughout the ship, it is a piece of workmanship I’ll marvel at forever.” He was, in fact, boarded on the Queen Elizabeth, a large troopship at Pier 21 in Halifax.

Donald describes his day-to-day movement on his sea journey and after his landing in the United Kingdom, except when there’s “nothing new to report.” He begins night flying on February 2, 1943, and “it’s no easy picnic here.” The diary comes to an abrupt end on Thursday, February 11, 1943: "Last night of night flying – now I can sleep at last, in fact, no sleep have I had in past 35 hrs. Also found I was posted to 30 O.T.U. and leave Tuesday."

Donald Reid never made it to Tuesday. He died in a plane crash on February 13, 1943 at 24 years old. There’s a young student in this area who said it simply and perfectly after studying this diary during the archives class: He died two days after his last entry, and that wasn’t fair. She went on to observe how Donald’s last entry was an entry like any other day. Of course Donald Reid could not see his impending death but somehow we expect his diary to reveal that he did.

War records are a difficult area of research and study. There have been countless times where, without realizing it, tears have sprung up in my eyes as I read a letter home to “Mom” from a young soldier overseas. The soldier’s homesickness reveals itself between the everyday notes about the weather and where they’ll be stationed next.

However, we occasionally catch a happy story amongst the angst, and Luva Perry, the first woman from Lennox and Addington to be posted overseas, wrote one of the best celebratory letters I’ve seen. She enlisted in the Canadian Women’s Army Corps on June 4, 1942, and served with the Royal Canadian Army Service Corps as a driver, and then in London, England, was attached to the Royal Canadian Electrical and Mechanical Engineers (RCEME) as a clerk.

Luva’s letter (co-authored with her long-time friend Grace) is for her “Folks” back in Napanee and describes the celebrations after VE Day (Victory in Europe, May 8, 1945) going on around her. Written on an armed forces air letter, Luva’s prose is light and humorous, not your typical war letter home to family:

"…the town went wild, thousands of civilians dancing and screaming in the streets, speeches in the square – we were kissed by everything and everybody – I came in and washed my face at least six times…[at one a.m.] there were crowds of civilians in the square whooping and dancing so we joined in and were really all out for Victory."

Luva and Grace returned to Napanee after the war. On her return, Luva collected her letters to her family and kept them as mementos of her time overseas. It’s a good thing she did because her letters are a bridge between the students and researchers here and the roles of women in the war, a vital group to the victory story. 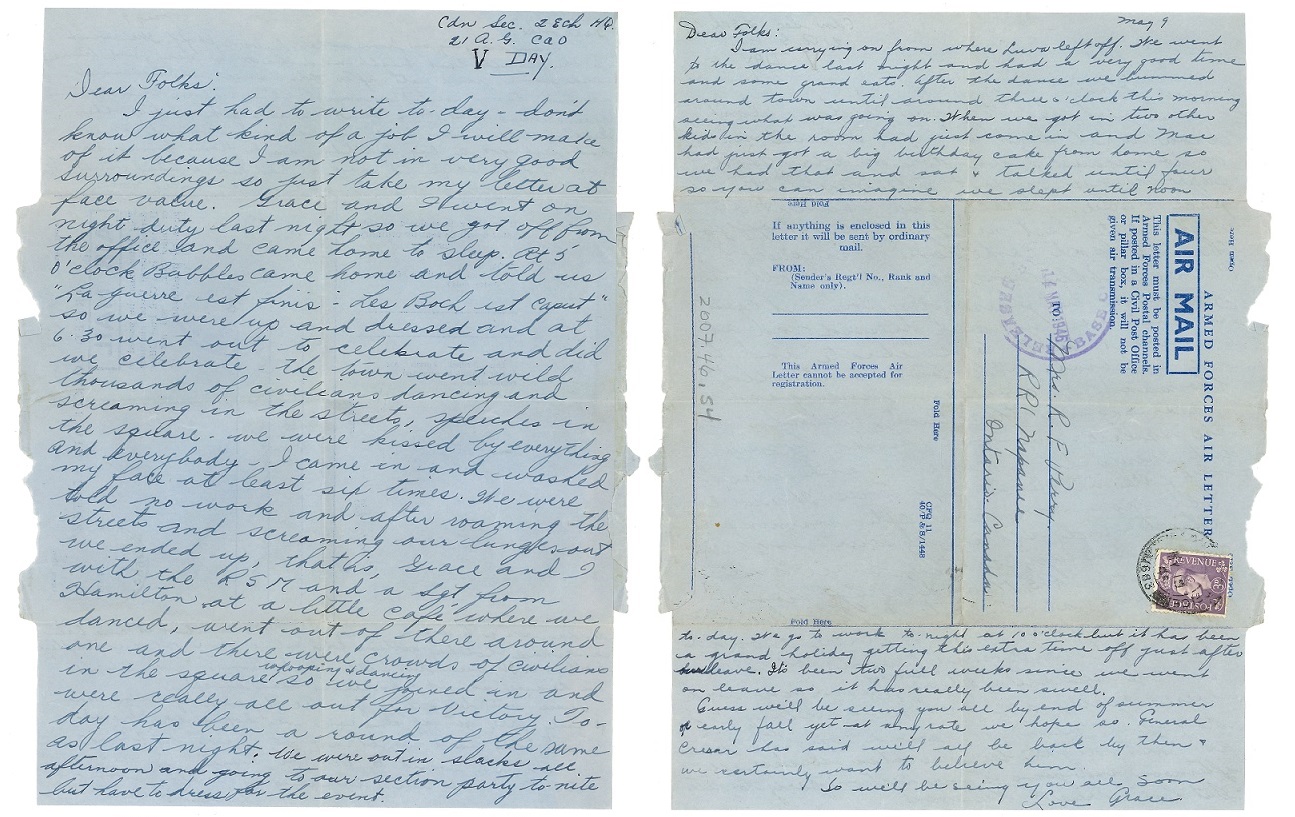 Harold T. Rogers was a handsome man. He could’ve been a movie star if not for the war that took his life on June 25, 1944 at the age of 20.  A pilot officer with the Royal Canadian Air Force, Harold was born in Odessa where his family lived at the time of his enlistment.

This may not be the first time you’ve heard about Harold Rogers because his story, along with Erich Possin, a German soldier, has been told before. Why tell it again? Because it’s a story of human compassion, something we don’t hear about often in an otherwise horrendous war.

On January 26, 1948, four years after Harold dies, the Rogers family receive a letter from Erich Possin, a German war veteran living in Berlin. He has written to the family before for confirmation of their relation to Harold Rogers. Erich was the last person to see Harold alive, and was offering the family the peace it may bring to know about his final moments. Erich was charged with searching for wounded and dead soldiers after an air battle near the village of Prouville in Northern France when he found Harold:

….I found your son. He was lying alone about 300m from our position, and as I still remarked weak signs of life I cared [sic] for medical assistance, but it was all in vain, with low words I could not understand, unfortunately, your son died in my arms. My thoughts were in his native country with his relatives. We had become comrades; for to-morrow already I could have had the same fate.

The students haven’t seen this letter, it’s too fragile to handle even in its plastic enclosure, but we touch on the theme in class of compassion crossing enemy lines. This story continues with Erich Possin eventually coming to Canada to meet the Rogers family. An unlikely bond between “enemy” and family for sure but a story that reminds us all of our humanity.