Spring has sprung at the museum. The snow is melting and I see the tell-tale signs that is spring- the bird song has increased, the days are longer and warmer, my garden beds are calling to me, my children’s bikes are tripping me up on the walk-way, and I sneak in the occasional day to wear my flip-flops. Spring is my favourite time of year. You would think with my red hair, I would be an autumn kinda gal, but alas….I LOVE Spring. It brings so much hope with its return, and I think we should always carry a little hope with us. It isn’t just at home that I carry this sense of joy and re-birth. This same longing for renewal carries into the workplace. I look around the galleries and I feel it’s time….time for new stories, new artifacts, new colour, new texture, and just a new energy to flow through our museum spaces.

April welcomes new exhibits that echo the change of season outside. Our theme for the Spring/Summer continues to include the idea of “water”. This Spring we are showcasing some pieces from the art collection “The Seaway of Yesterday” as painted by local artist Orval C. Madden in 1956. Through these paintings, Madden has captured an earlier time in some of Eastern Ontario’s villages before they were lost to the seaway flood.  Construction on the St Lawrence Seaway and Power Project began on August 10th, 1954. The expanded Seaway allowed for the construction of seven locks and a deeper and wider navigation channel. The project also included the construction of the 2,090 megawatt Moses-Saunders Powerhouse near Cornwall, Ontario. The expansion resulted in the displacement of 6500 people and the loss of 325 dwellings, while some villages and homes were moved, some were simply lost.

The “Lost Villages” depicted by Madden are Farran’s Point, Morrisburg, Aultsville, Dickinson’s Landing, and Iroquois.  We are fortunate to have 9 of these large paintings loaned to us by Madden’s great-nephew, along with his paint pallet and easel. 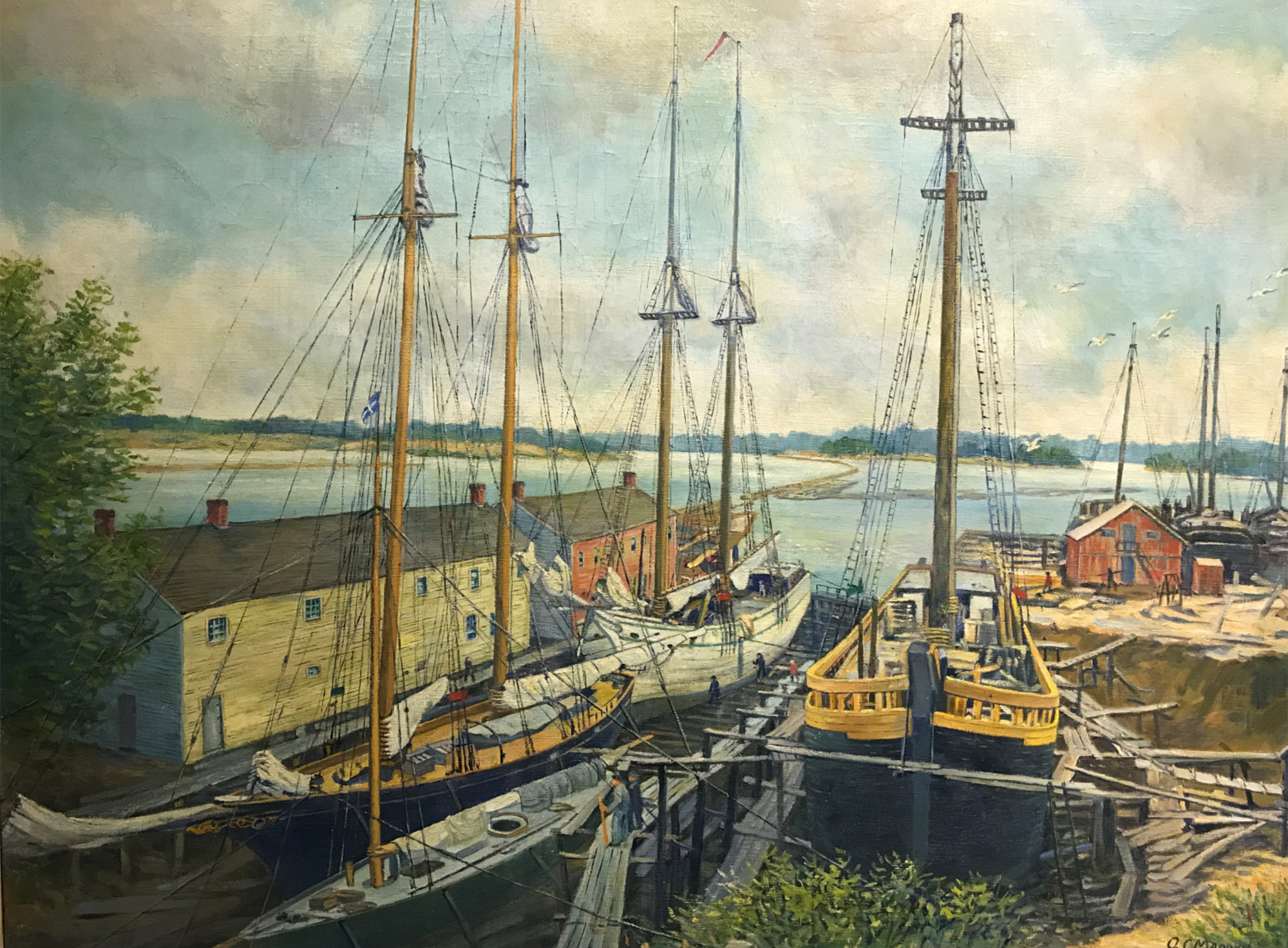 A depiction of an active fishing harbour in the Seaway, most likely Iroquois,  O.C. Madden, 1956.

The paintings are quite large, some measuring at 4’ x 3’ and highlight waterways, bustling villages and harbours, and beautiful rural vistas.  In my research, I read that Madden grabbed his, camera, pencils and pads and travelled the route of the seaway to capture these scenes before they were lost forever. Madden took a historical approach and some artistic license to set most of the works in a time long before the flood, many of them demonstrating the hustle and bustle of real life Ontario in the 19th century. In a sense it adds to the sadness of what was lost. 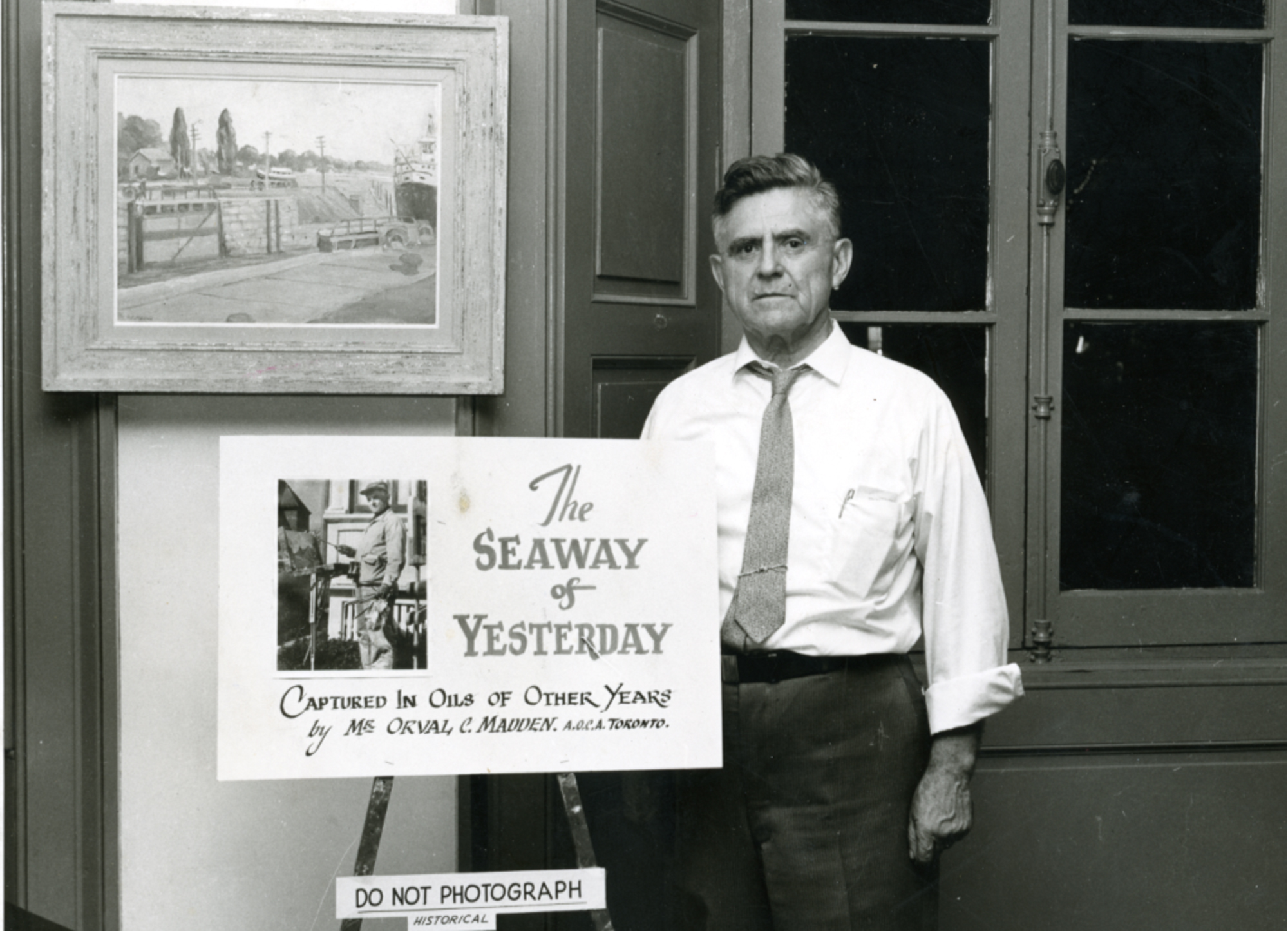 Madden at the launch of the “Seaway of Yesterday” exhibit, 1959

O.C. Madden was a prolific painter, his family connection is long entangled to Lennox and Addington County. He moved to Toronto as a young man to pursue his education in the arts and was a friend to members of the Group of Seven. Although he remained in Toronto for most of his adult life, the call of Lennox and Addington drew back time and again. Madden died in 1971 and is buried in Napanee.

As a complement to the “Seaway” paintings, an artistic rendering of Madden will be created as a part of the existing water vignette in the large central gallery of the museum. This life-size form will feature him painting “plein-air” along the river shoreline. This artistic endeavor is created through the skill and vision of theatre set designer, Clelia Scala, a known artist in the Toronto theatre world. 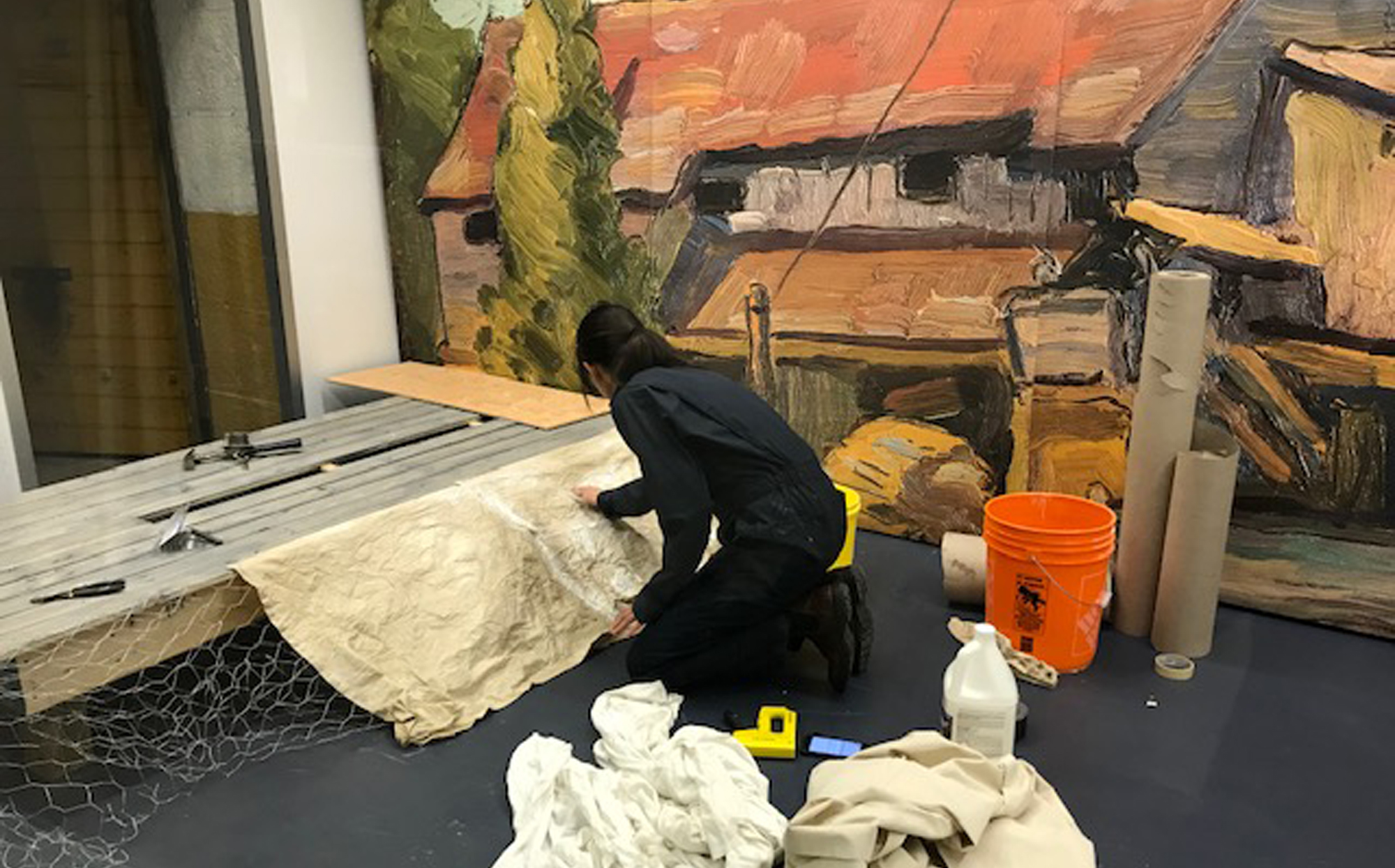 Exhibit designer has begun the installation of the Madden vignette.

Several other pieces of Madden’s work which include- paintings, Christmas cards, and sketch books, will also be displayed, all from our own archival holdings.

As we shift from Winter to Spring, the curator in me also shifts the exhibits to themes of warmth and sun. Other upcoming exhibits include - “Ships Ahoy” the third exhibit in the Museum @ Play series. The exhibit includes- 30 hand crafted model boats courtesy of the Metro Marine Modellers, these delightful models greet you in the front reception, each of them so exquisitely detailed and capturing the essence of life on the water.

30 hand crafted boats are displayed for the summer courtesy of the Metro Marine Modellers.

Additionally, the museum is promoting natural heritage this summer. Travelling from the Canadian Museum of Nature is a large exhibit entitled “Our Feathered Friends”.  This exhibit highlights the birds in our backyards- it includes interactive modules, audio bird songs, habitats, and specimens. Due to arrive to the museum June 24th.  This exhibit will coach you to stop once in a while and enjoy the beauty in our backyards. 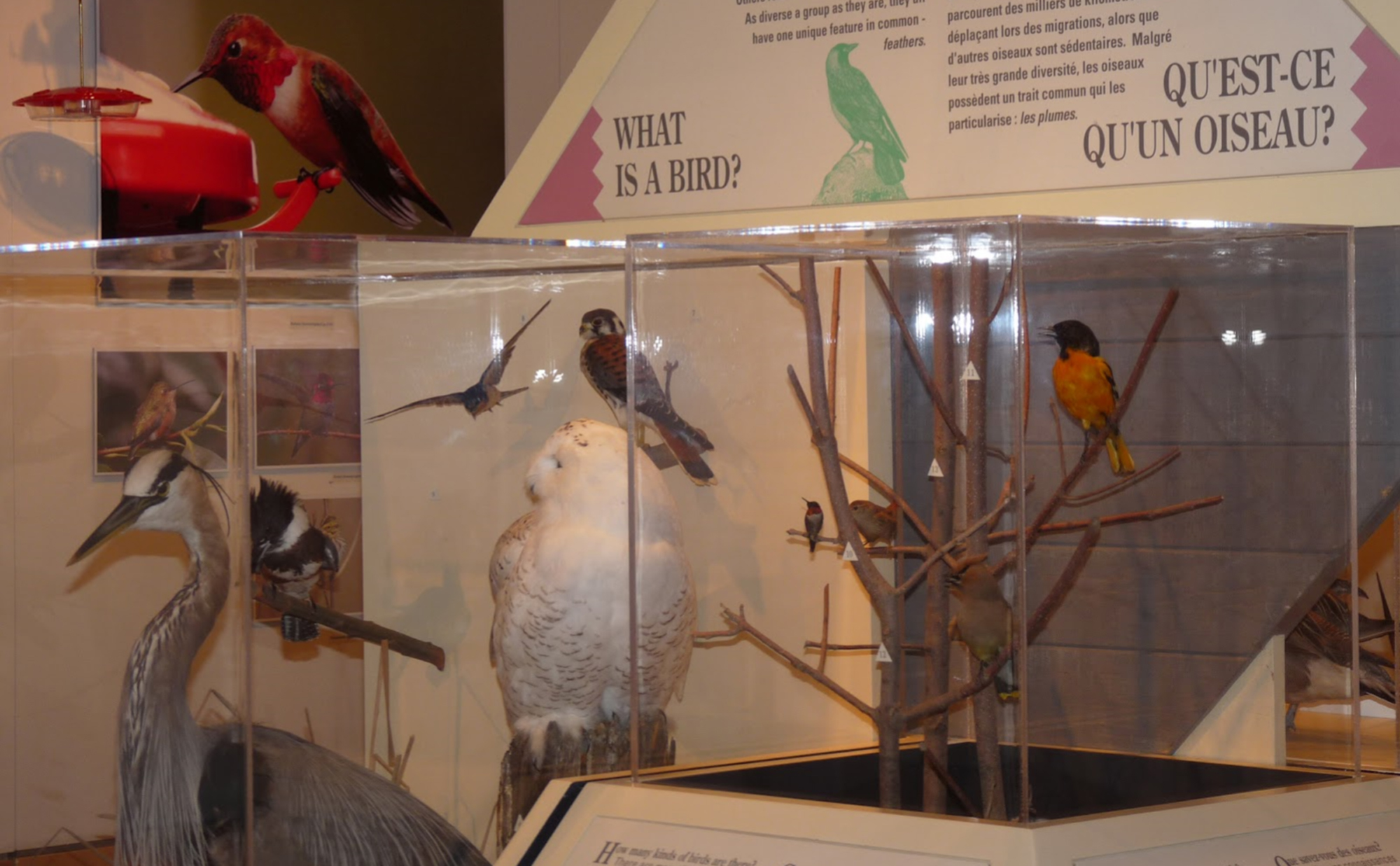 Our Feathered Friends will be at the museum until September 6th.

The museum is indeed preparing for the warmer months and I am hopeful that Spring is here.  The museum is a perfect place to enjoy the changing season, so be sure to come visit us while we fling into Spring and beyond.