Let me start by saying I feel a bit like the guy who has been on the end of the bench most of the hockey game, but late in the 3rd period with everyone else tired and sore I am put in and I happen to be in front of the net when a shot from the point deflects off my leg and goes into the goal and we win the game.  Will I be recorded as scoring the winning goal?  Yes.  Was my play the main reason the team won? Not really.  Will I tell the story of my winning goal for years to come? Of course, I will!!

Kim MacGregor and I are both volunteers at the Museum of L&A. We recently combined an interest we share, and did a presentation titled “DNA and Other Genealogical Tools to Solve Adoptions and Other Family Tree Mysteries”. The presentation went as well as could be expected in an online environment where you speak to a camera and receive feedback through brief typed messages in the chat window.  One audience member came forward and asked her question live.  It was refreshing to hear from someone, almost in person, and hear about her tree “brick wall” and share some suggestions about how we might approach it.

Her problem intrigued me and a couple of days after the presentation I contacted her to see if she was interested in my assistance and she was.

Her 3X great grandfather (on her direct paternal line) shows only a mother and no father on his birth certificate. For upwards of 50 years, they have been trying to identify this unknown man, let’s call him Mr. 4X. I think I may be able to help with DNA analysis, but it may be a long shot. Her 3X great grandfather was born in 1796, so Mr. 4X is likely born in the 1770’s or earlier and I should find him in or around Little Thurlow, Suffolk, England in 1795. Autosomal DNA (Ancestry uses this type of DNA) can be useful back to 7 or 8 generations at most and this is 6 generations back from her, so we may need some luck. 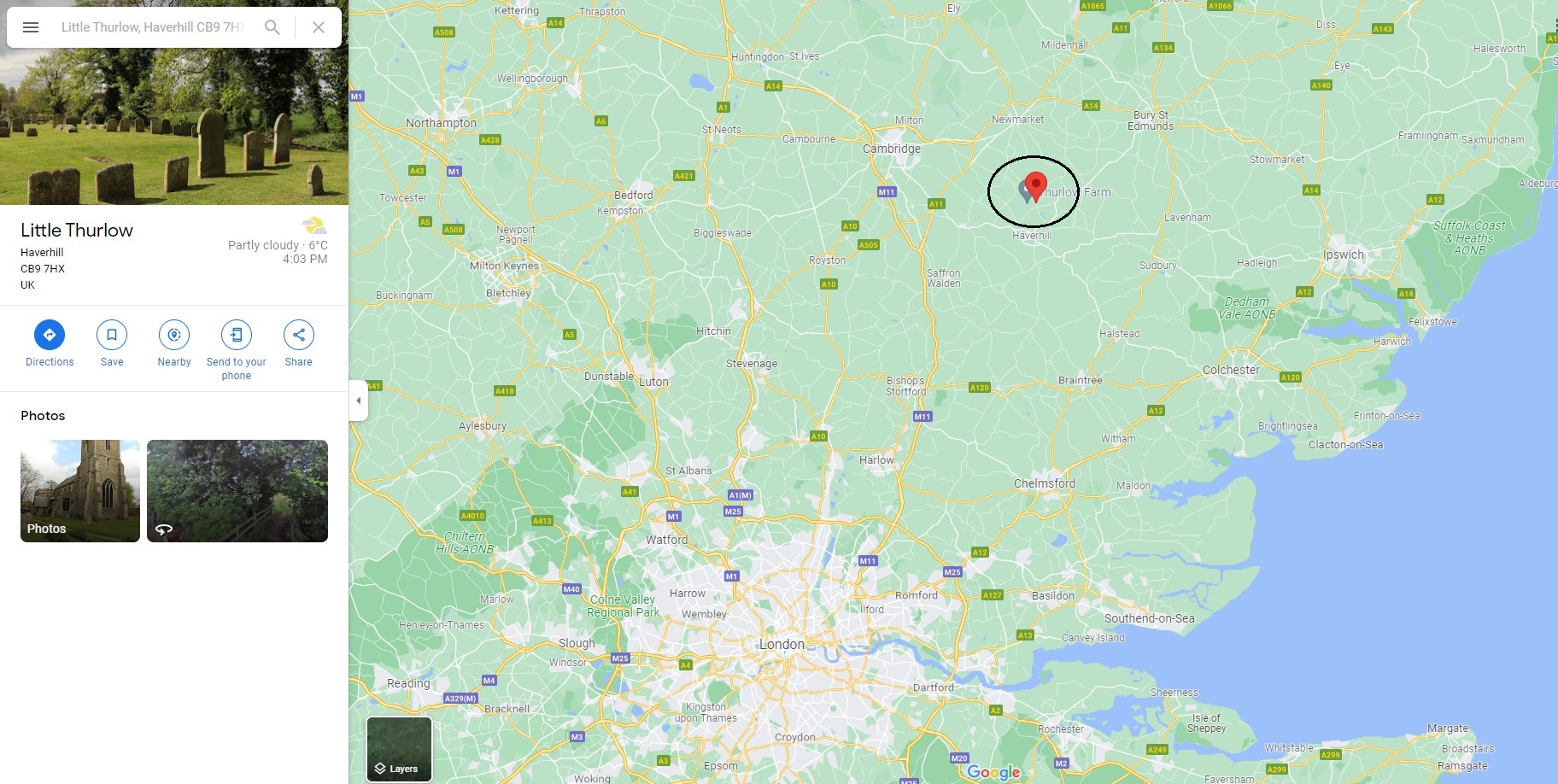 To put this in perspective, she will be half 5th cousin to anyone who is descended from the same man. The good news is that we have a lot of 5th cousins, typically in the thousands. The bad news is that we will share a very small amount of DNA with them. Typically, only 0.05% when we do match and we will only show a DNA match on about 15 to 30% of the 5th cousins who have tested.

She shares her Ancestry tree and gives me access to her DNA results. She has already done DNA testing on herself, her father, a sibling and four 2nd to 3rd cousins on the paternal line. The DNA results have also been cross posted to other sites such as GEDMatch and MyHeritage to increase the pool of matches to work with. She has even tried Y DNA testing for her father and another male on the paternal line with no close relatives or a clear male line identified.

I open her tree and it is a thing of beauty. Without a doubt the most complete tree I have ever seen. She has over 9000 people with over 14000 records and notes on many of her DNA matches to identify confirmed or suspected lines. She has even identified a group of DNA matches on her father’s side, but has not been able to single out a likely candidate to be related to Mr. 4X.

This is my chance!  Her tree is so good it is like we have a power play for the last two minutes of the game. I just have to get in front of the goalie and something is bound to deflect off me and go into the goal.

I start digging into the tree, but she appears to have already looked into most of the avenues I would suggest.

I try the next closest potential matches and they only have partial trees so I build them back, but they are all in US locations back to the early 1700’s and mostly in Virginia, so no usable leads. There is a single match in Australia that looks hopeful, most lines trace back to Ireland and Scotland but, one line goes back to Essex County, next door to Suffolk County. I search further, but the line ends up connecting to a known line in the tree and not the line we are looking for.

You also need to become knowledgeable on the geography of the country and the immediate area to know if matches are even close to the area we are looking at. Also be aware that place names and boundaries can change over time.

Time to try a different approach. I copy the DNA match group from her father’s side into an Excel spreadsheet and see if I can find any patterns. I create smaller groups where the DNA matches appear to share DNA with her and each other. I eliminate groups where anyone has an identified ancestral couple who could not have descended from Mr. 4X.  I also highlight in green groups that might tie to Mr. 4X or his ancestors. 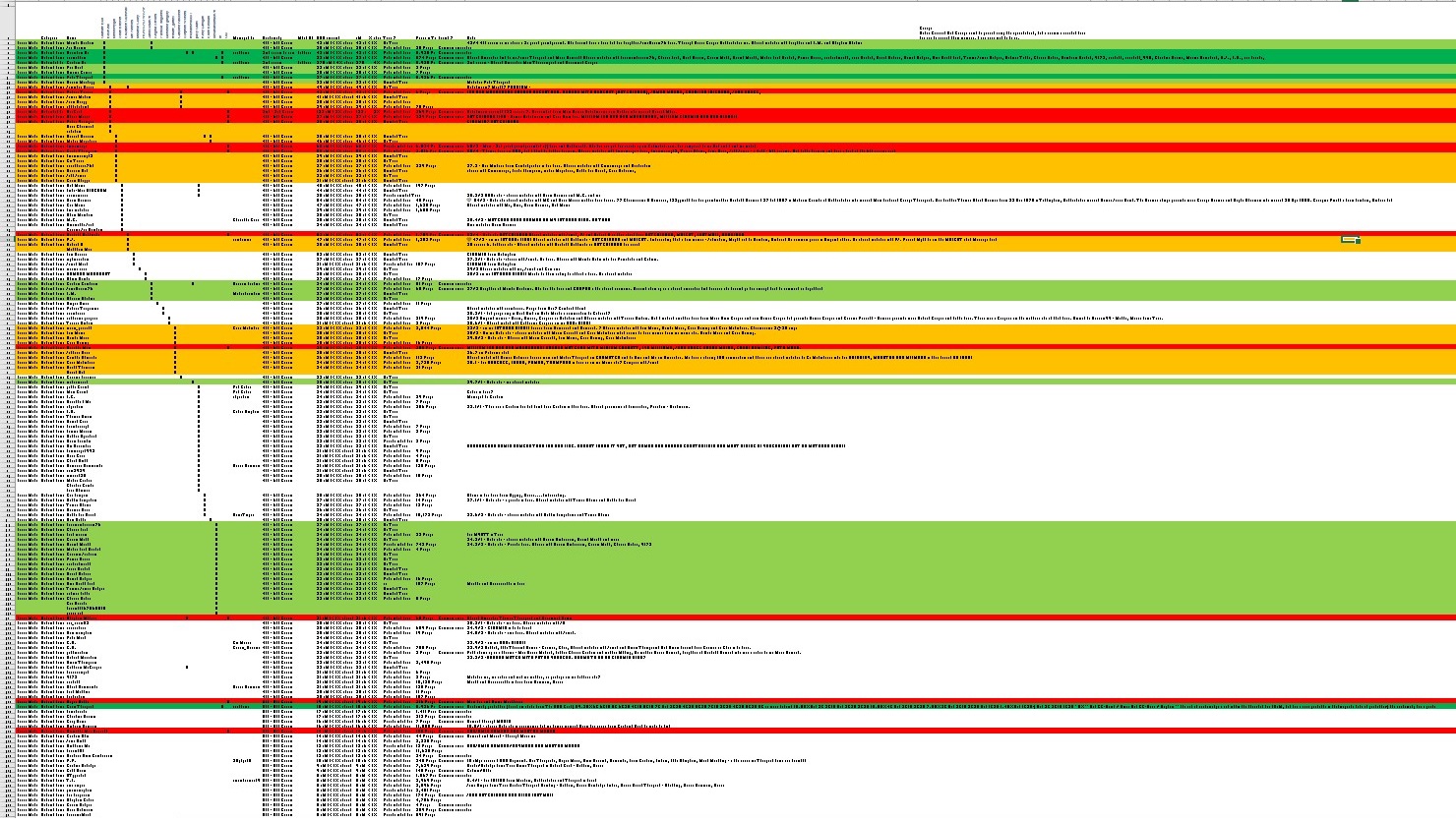 The red and orange highlighted are out, the green highlighted are the paternal line potentially and the unhighlighted I have not yet classified. I then find a group (the green band towards the bottom) who match each other, but are quite distant and have no identified potential lines.  The group also has a single match to the earlier group of the known paternal line.  I look at them in detail and only some have accessible trees and none go further back than 3 generations.  Again, I start building the most complete tree back to my time line – the 1770’s and see if there are any locations close to the mother in Suffolk County in England.  Remember that we will be dealing typically 6 generations back from the DNA match and if the tree is complete, I will have 64 4X great grandparents to try to identify and locate.  I find a lot of Yorkshire and Lancashire families before one Essex County family shows up.  A quick check with Google and the town in Essex is only 20 miles from the town in Suffolk.  There may be a possibility, but this is only in the tree of one of the DNA matches.  I go back to the match list and try a trick I use.  I look for matches who may have ancestors outside England to reduce the size of the tree I will have to search.  I find one with a Scandinavian name and most of the close ancestors, except for one line, trace to Denmark.  I build the England part of the second tree and it starts, like the other one in Utah, but I soon see the same last name popping up – Wyatt, and then it traces back to the same family back in Essex.

Suddenly I have a suspect for Mr. 4X - John Wyatt born Dunmow, Essex England in 1771 and still living there in 1795.  I think I just felt a puck bounce off my shin pad.  The goal light is on. I think they are crediting me with the goal.  Time to use that goal celebration that I have been practising for years. 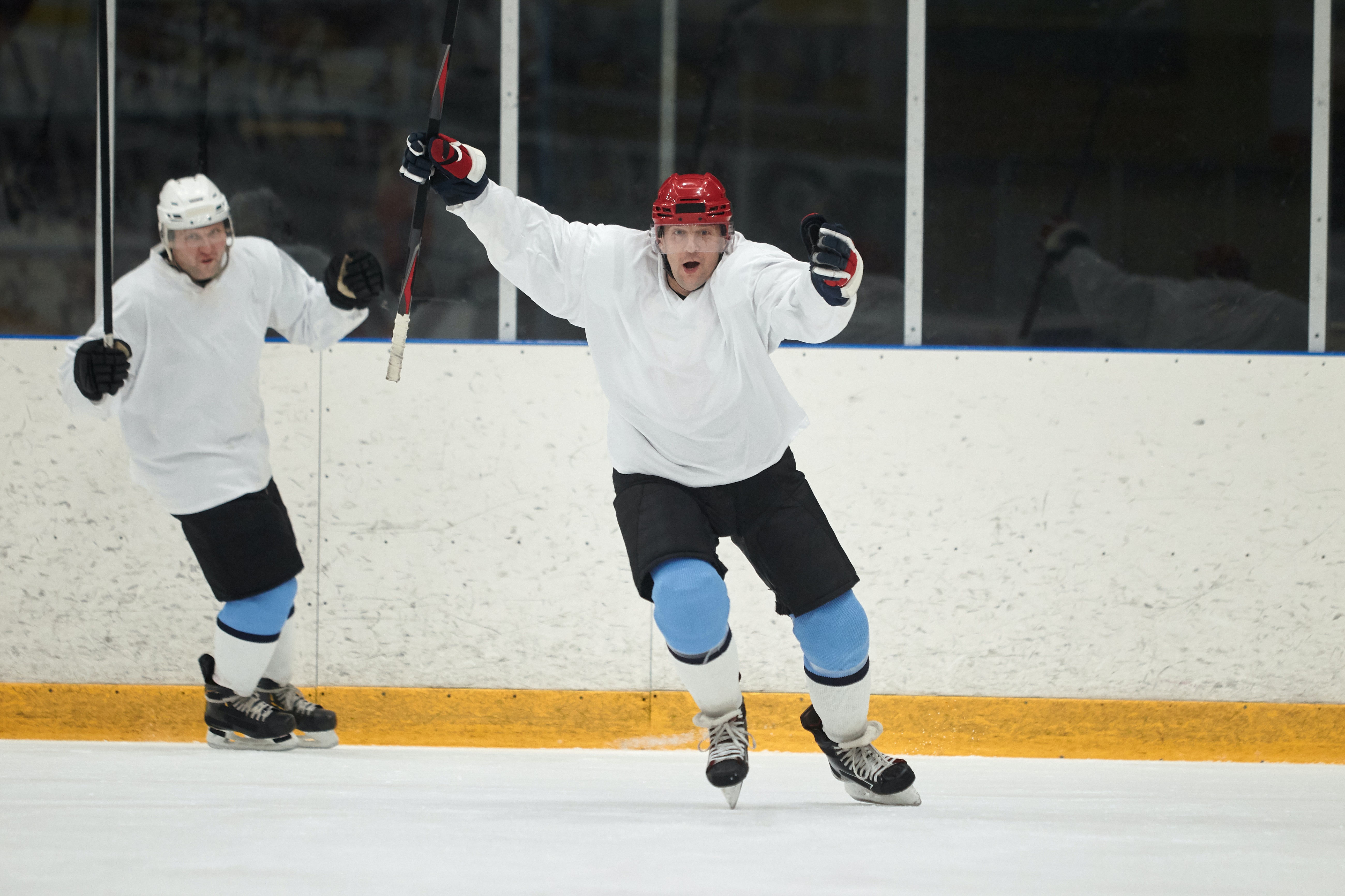 But wait.  The game isn’t over yet.  We have to defend our lead.  Have I jumped to an early conclusion?  Are there other suspects I should consider?  Yes, this is just a lead but, I think, a very strong one.

We go on to build the tree around him and the case looks better.  Ancestry is giving us over 20 Thrulinestm to DNA matches through two other sons of John by a different woman.  We still need to build the case and a Y DNA match between her father and one of the Wyatt male lines would be ideal.  She has already reached out to a couple of Wyatt descendants to see if we can make that Y DNA match and she has been busy adding documentary evidence to the new additions to the tree with some reinforcing the match and some twists to the story.

So how did I answer the mystery so fast?  It was 4 days from contacting her to sending an email saying, with some proof, that I think John Wyatt is the man she is looking for.  The simple answer is that I was in the right place at the right time and took a look with a new set of eyes.  Without the vast amount of work she had done to build her tree, identify the common ancestors that many of her DNA matches descend from, make extensive notes on names and locations found in the trees of DNA matches and get other relatives tested to add to the pool of DNA matches, I face months of work to get to this point, if I can even get this far.  Identifying an unknown father for a birth that took place 225 years ago is always a big ask.  DNA testing has opened up possibilities we could only dream about 20 years ago.  It also takes a bit of luck and ours had to do with the Utah ancestors, but that is a story for another day.

If you would like me to be that “new pair of eyes” to help with your family tree mystery, you can contact me through archives@lennox-addington.on.ca.