Over the last few weeks I have been changing out the exhibits and confirming exhibit plans for the next 3 years. I like to plan ahead so that my cycle changes out with reduced hiccups. I also collaborate with several people to come up with a plan that entices several demographics- this is not an easy task but I think we have hit the mark the last few years.

An exhibit that I had a lot of fun curating this month was “Game On! – L&A Sport Stories”. This exhibit features stories from today’s athletes as well as highlighting yesterday’s sports that draws on our museum and archival vaults to highlight athletes, teams, and events.

The thought for this exhibit came to me last year when I showcased a hockey sweater worn by a former Gibbard employee in the 1930s. That uniform was commented on more than any other object within that display. So that led me to believe that there is interest in sports and the material culture left behind.

Hockey Sweater (2001.11.19) worn by Fred Bentley, a Gibbard Bruiser in the 1930s. You can find out more about this sweater and Fred in our online database link here.

I chewed on that idea for a little bit. I knew I wanted the exhibit to include “Now and Then” stories. I looked in the museum collection and spied a few baseball uniforms, a little hockey gear, a couple of golf patches and one football. Hmmmm….that left me pretty limited in terms of creating an exhibit with objects. I would need to dig deeper. So I went after the archives, could we supplement this exhibit with photos and textual records (posters, flyers, invitations)? I looked at my colleagues earnestly – Kim and Lisa dug into their collection for fun posters and photos that would highlight sports of all sorts through the county. They narrowed down posters promoting sports events, fundraisers, and celebrations. They found photos featuring sports of varying themes.

The earliest photograph exhibited is the 1886 Napanee Bicycle Club – the freedom the bicycle gave you would have been exhilarating…riding up and down those country lanes at a speed that I am sure was scary for the day.  Amazingly good fun I am sure was had in that club! 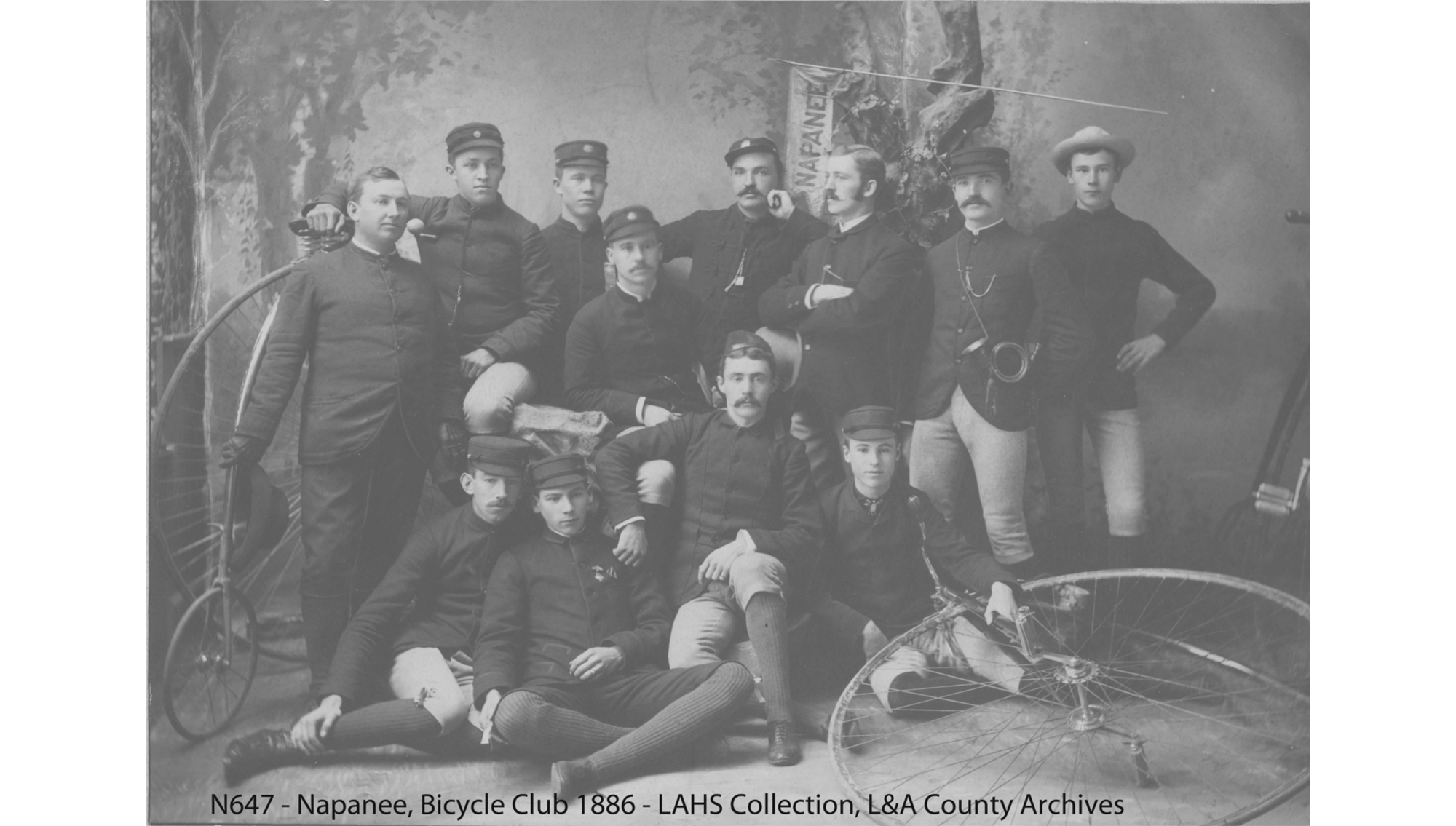 Along with the “old” historical, I wanted to include the “new” historical- you know the athletes that would be historical 50 years from now. I talked to some local folks and asked who we should showcase from today’s sports world and two outstanding athletes came to mind – Britt Benn and Josh Whalen.

Our own Britt Benn, from Napanee, has proudly represented Canada in Rugby Sevens at tournaments around the world and was chosen for the Olympic team in 2016 and will be representing Canada again this summer in Tokyo. Britt originally came from a hockey background but tuned into Rugby during high school. It was a sport made for her and she makes it look easy (we all know it is not). I approached Benn last summer and she was enthusiastic from the beginning. Benn’s exhibit case is very patriotic and colourful – showcasing her Olympic gear from 2016 along with a handful of mementoes as well. 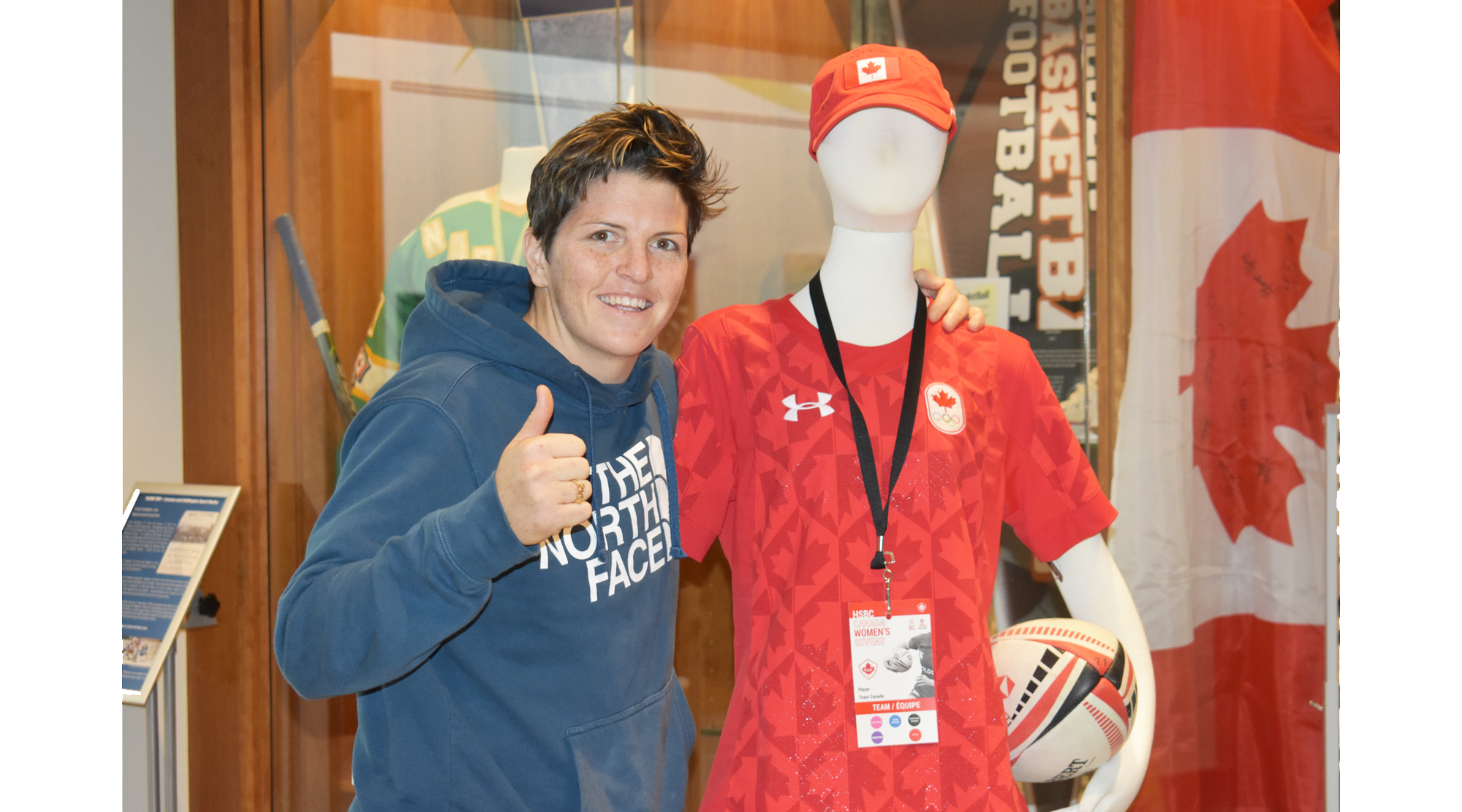 Britt Benn giving the museum and her mannequin the thumbs up!

Another local athlete is Josh Whalen. I admit I don’t know much about golf, it’s why I create these exhibits, I learn right along with you too. I drove to the Napanee Golf Club on a rainy fall day to seek out manager Milt Rose and my luck was with me, Josh was actually out on the course. He came across quiet and reserved, but was happy to help me with the exhibit.
Whalen is also a Napanee native, who started to play golf with his grandfather. With a natural talent for the game, some hard training and determination, he was noticed at local tournaments and was invited to play at larger tournaments throughout the region and across the country. Josh is the current course record holder at Napanee Golf and Country Club with an eight under par 62 on September 29th, 2017. Breaking the former record of 63 held by 82 time PGA Tour Winner Sam Snead from 1959.

Whalen’s star continues to rise with placement on the National Team and is now competing professionally around the world. Whalen has loaned the museum a caddy bib from the Canadian Open, golf caps and his framed record breaking scorecard from the Napanee Golf Course 2017.

Josh Whalen on a PGA tour, photo courtesy of Whalen and Golf Canada

“Game On!” also features a yellow and green baseball uniform worn by the Odessa A’s. The A’s were a fastball team who won back to back championships 76/77 and drew hundreds of people to their games while doing it. Look for that story in the exhibit by team manager, Rick Revelle. 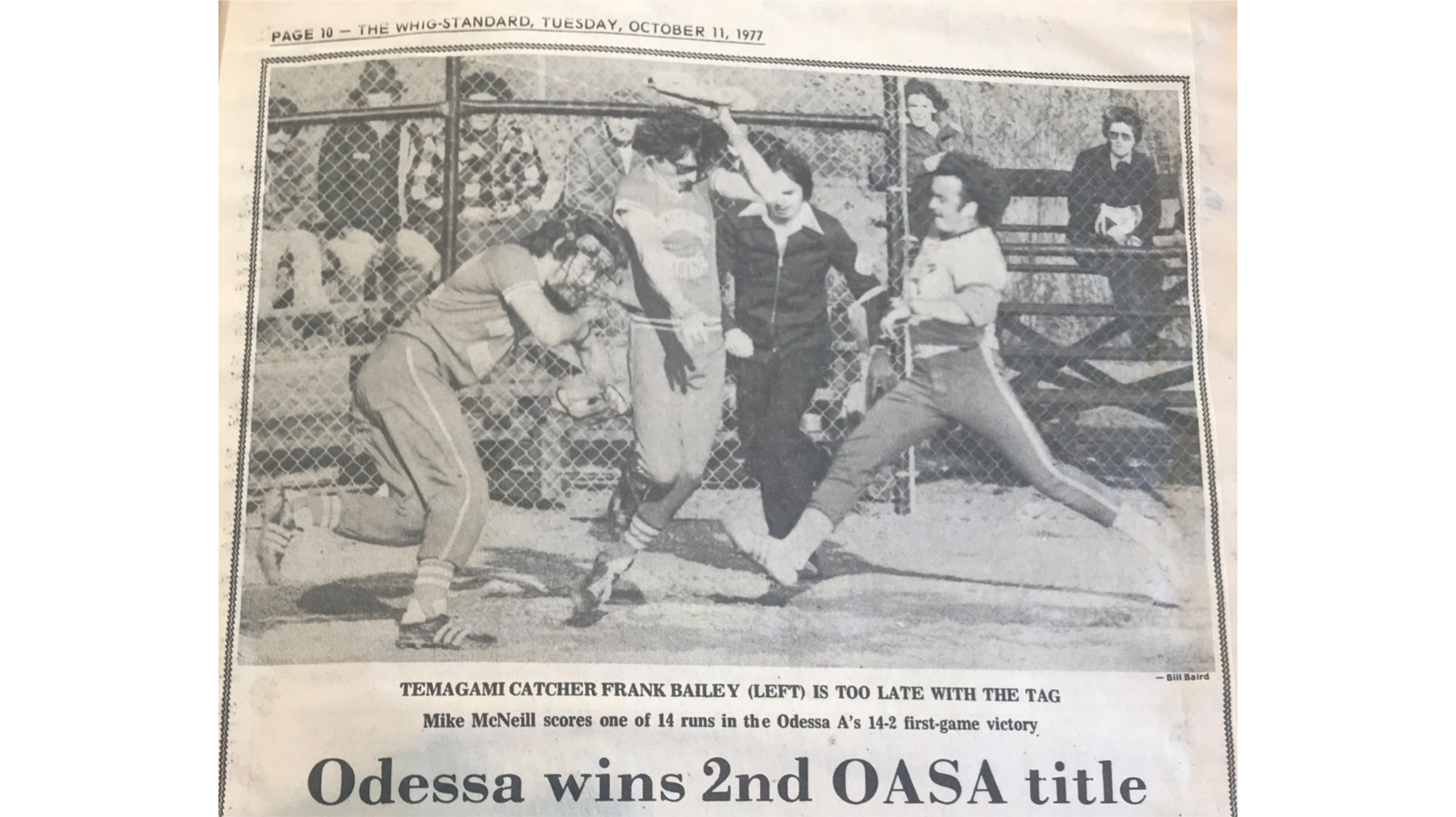 If you like hockey – perhaps the exchange between Sweden and Napanee would intrigue you. Our Juvenile Hockey team visited Vallentuna, Sweden in January of 1976. We have dug up newspaper clippings, posters, and an original jersey will be featured in the display. Researching this was fun and became a little personal for me to read.

My son is a goalie for the local rep team in Verona, so reading graphic accounts of hits to the goalie’s face- which caused concussion and days off from the games- had me cringing at the thought of Fraser taking a hit like that too.

A Juvenile team player is about 19 years old, they aren’t that much older than my son. Oy! - Those hockey moms waiting to hear from their kids would have been difficult, if my hockey mom brain is anything to go by. Remember this was before dense safety gear, face cages and before social media and text messages could make information instant. While the gore of the games is recorded in vivid detail by the Swedish papers, I also read about the fun that was enjoyed– tours of the cities, billeting in family houses, shared meals, and the creation of lifelong friendships.
“Game On!” is really just about that – the understanding and the reflection of what sports bring to our lives – the competition is there but so is the building of character, shared dreams, community rallies, cheers, and friendships. While exploring the exhibit, I hope you see within the photographs, the posters, the objects, and the stories themselves, the embodiment of these very things.

There are a bevy of other stories included in the cases as well- other hockey stories from visiting world hockey teams. Also some vintage basketball shoes and basketball and a football from local hero Leroy Blugh. The Napanee Curling Club has a long history in the County, and has graciously loaned the museum artifacts to complement their story. Lots to see and read. “Game On!” will be featured until the end of May 2020.

If you have a sport story of your own, we would love to hear from you. Your story will be featured in our new County web project “L&A Stories” - which captures the memories of L&A from today’s residents. Check it out and drop us a line.