How the Dark Sky Viewing Area Came to Be

We know that we have an amazing view of the night sky at Lennox & Addington County Dark Sky Viewing Area, but how did the site come to be? It's a pretty interesting story...

In 2010, a county resident was making regular trips from his Yarker home north to Pembroke, using County Road 41 for his commute. He couldn't help but notice that the view of the sky was spectacular and often pulled off the highway to take night sky photos at an easily accessible location between Erinsville and Kaladar. After looking at a light pollution map he determined that the roadside spot where he was stopping was the most southerly spot in Ontario with an unimpeded view of the night sky. 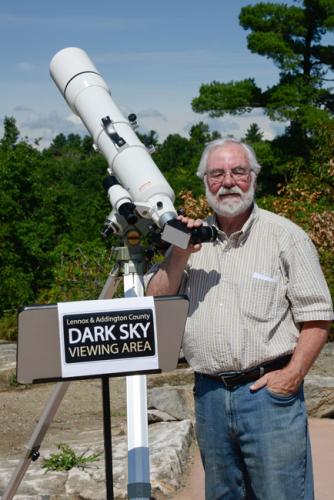 It turns out that this gentleman was none other than Terence Dickinson, accomplished stargazing author and long time editor of SkyNews Magazine. He told his story to the folks in the Lennox & Addington Economic Development Office. It didn't take much convincing: they saw it as a great tourism opportunity and immediately got to work on constructing what is now known as the Lennox & Addington County Dark Sky Viewing Area.

The rest is history. The site has been an overwhelming success since opening in August 2012, attracting thousands of visitors each year.

In 2013 Terence received the County of Lennox & Addington Lifetime Achievement Award. A plaque was installed at the Dark Sky Viewing Area to commemorate the contribution he has made to his community. On clear nights, there's a chance you'll see Terence at the site. He's often there taking photographs and letting visitors take a peek through his telescope.

Get in Touch
Back to Dark Sky Viewing Area Home