Lennox & Addington is an excellent destination for bird watching. More than 350 species can be found within our borders.

One hotspot in particular for birding enthusiasts is Amherst Island.  It’s a wonderful place to view and learn about a variety of owls. The most common species found here during the winter are the Northern Saw-whet Owl, Long-eared Owls, with smaller numbers of Barred Owls, Great Horned Owls, and a few Boreal Owls and Great Grey Owls. Snowy Owls, as well as the Northern Hawk Owls, are usually found in trees and on fence posts or hydro poles near open fields throughout the Island.

While bird watching, please respect the wildlife and vegetation on your visit. Remember not to get too close and move and speak quietly. Avoid the use of a flash if you are taking photographs. 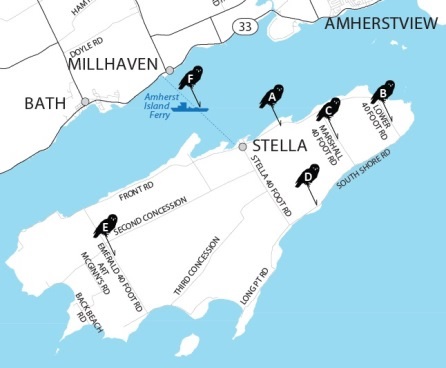 Amherst Island is one of the best known spots in Ontario for winter birding because the island regularly supports large populations of hawks, harriers, owls, shrikes and waterfowl. In spring and autumn Amherst Island can be a great place to see migrating waterfowl, shorebirds and passerines. During the summer months the island is home to a few notable breeding species like Wilson's Phalarope.

Virtually all of the land on Amherst Island is privately owned, so most birding is done from the roadside. There are a few properties however, to which land owners kindly allow public access.

Below is a list of some of the best birding spots on the island.

Front Road runs the length of the island but it is the eastern end of the road between Stella (where the ferry docks) and Lower 40 Foot Road that is most heavily birded. Water views of Stella Bay, Preston Cove and the North Channel can provide views of good numbers of water birds throughout migration and winter. The extensive fields along the south side of the road provide a broad view of the island's northeast interior. Inland views from the road are excellent places to spot Rough-legged Hawk, Red-tailed Hawk, Northern Harrier, Snowy Owl and Short-eared Owl, either in flight over the fields or perched on fence posts or in trees.

The eastern most part of Amherst Island is owned by the Kingston Field Naturalists (KFN). This approximately 100 ha conservation reserve is home to breeding grassland birds, Osprey, Purple Martin and Wilson's Phalarope. During migration the shoreline, pond and spit can be excellent for waterfowl and shorebird viewing. For several weeks in autumn Nelson's Sparrow can be pished out of the pond side vegetation. The ponds are also a good place to find Black-crowned Night-Heron. The spit is the best place to view the extensive Double-crested Cormorant colony on the Brothers Islands. Check among the cormorants for Great Egret, which roost and nest among them. The KFN property is probably the best spot in the Kingston Region for finding this fairly rare species. In winter several Snowy Owls can be often be seen on the ground fence posts or osprey nesting platforms. Rough-legged Hawk, Short-eared Owl and other predatory birds can be easily found here. An impressive number of rare birds have been recorded on this property over many years. These include Eared Grebe, American White Pelican, Tricolored Heron, Glossy Ibis, Cinnamon Teal, Piping and Snowy Plovers, American Avocet, Marbled Godwit, Curlew Sandpiper, Laughing Gull, Arctic Tern, Northern Wheatear and Smith’s Longspur. Birders should always be on the lookout for rare species when visiting this part of the island!

Access Note: You must be a member of the Kingston Field Naturalists Club (or be accompanied by a member) to access this property.

The Owl Woods is arguably the best spot in Ontario to reliably see Northern Saw-Whet Owl and Long-eared Owl. Both speciess are present in most winters. Barred Owl and sometimes Great Horned Owl are resident in the immediate area and are also commonly encountered. In some years one or more Boreal Owls can be found here too. The thick jack pines and shrubbery also tend support a wide diversity of winter birds and lingering warm weather species such as Hermit Thrush and

White-throated Sparrow. The bird feeders attract Red-bellied Woodpecker, Red-breasted Nuthatch and other species. During migration good numbers of warblers and sparrows move through the woods.

Access Note: The Owl Woods are private property which birders are allowed to useby the good grace of the land owners. Please use respect and obey all signs. No dogs are allowed. No disruption to the owls or their habitat will be tolerated.

The South Shore Road offers excellent views of Lake Ontario. During especially cold winters, the only open water visible from the island may be off the south shore. Large congregations of waterfowl may gather here including Greater Scaup, Redhead, Long-tailed Duck, Common Goldeneye, Bufflehead and mergansers. Also look for Common Loon as well as Red-necked and Horned Grebe. The vast open water may very rarely provide a vigilant observer the chance to see a jaeger or other seabird.

For a convenient birding loop head west on 2nd Concession Road from Stella 40 Foot Road. All along this road the open pastures on both sides may provide good views of Rough-legged Hawk, American Kestrel, Red-tailed Hawk, Northern Harrierand Short-eared Owl, either in flight over the fields or perched on fence posts or in trees. In winter, Snowy Owls can be also be seen. During the late spring and early summer it is common to see Eastern Meadowlark, Eastern Kingbird, Savannah Sparrow and Bobolink along this road. Other species that may be encountered in lower numbers include Eastern Bluebird, Grasshopper Sparrow and Upland Sandpiper. Continuing the loop, turn south on Emerald 40 Foot Road. Here you will find more open pastures and fields. About 1.5 km along you will enter a mature wooded area that stretches for about 2 km on both sides of the road. During migration these woods are a very important stopover for warblers, vireos, flycatchers and sparrows. In winter look for Barred Owl, and Pileated Woodpecker. During the breeding season this area provides suitable nesting habitat for some rarer Amherst Island species including Red-bellied and Pileated Woodpeckers, Yellow-bellied Sapsucker, Veery, and in 2012 a pair of Rusty. Turning left on 3rd Concession Road offers water views of Amherst Bay and Nut Island. Throughout migration and winter good numbers of water birds can be seen in this area. Continue along 3rd Concess on Road to a large marsh on the south-side which is excellent habitat for herons, bitterns, Swamp Sparrow and Marsh Wren. During fall migrations this wetland is an important roosting sites for swallows and blackbirds. Further along the road the extensive fields along both sides provide a broad view of the island's south-western interior. With plowed fields fewer hawks will be present but in winter large numbers of Snow Buntings with some Lapland Longspurs can be seen.

The ferry ride can provide views of water birds including Common Loon and numerous species of ducks. When the North Channel freezes over the strip of open water created by the ferry attracts gulls and waterfowl as well as predators. occasionally a Snowy Owl can be spotted on the ice during a winter crossing.

Make a day of it on the island! 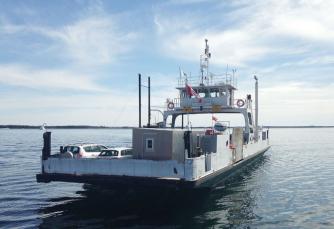 Take your car (or your bike) across the ferry and pick up your Dry Stone Walls Self-Guided Tour Booklet at the Neilson Store Museum.  Visit the Sand Beach Wildlife Conservation Area and the Owl Woods. Do some shopping at Topsy Farms or at a number of artist shops along the way.

After stopping for a bite to eat at The Back Kitchen, perhaps find a few of the dozens of geocaches on the island, or take in some world class music at the Waterside Summer Series. Don't worry, if you're too tired to head home, there are a number of great bed & breakfasts where you can rest up for the night.